Official ceremony of the private international Snow Leopard Foundation was held in Almaty featuring Nurali Aliyev, prominent businessman and philanthropist, as a founder. 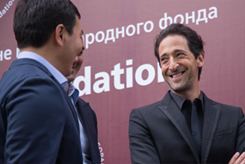 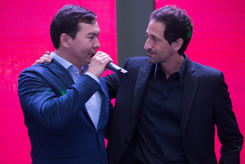 In his welcoming speech Nurali Aliyev admitted that his idea of foundation had been cherished for some time before he came up with the crucial decision to establish the system that would restore the population of snow leopards in Kazakhstan for decades onwards.

Snow leopard is the symbol of independent country of Kazakhstan. However, in less than quarter-century the population of these animals in Kazakhstan reduced by over 40%, he stated. According to N.Aliyev, «Snow Leopard Foundation» will serve as the first foundation in the CIS countries to reintroduce the population of snow leopards in Kazakhstan.
As it happens,construction of the snow leopardbreeding and adaptation center on the area of over 500 hectares within the territory of Ile-Alatau National Reservation is expected under this unique program «Kingdom of Snow Leopard».A special visiting center and vista points where people will be able to observe the species from a safe stand-off distance, will add to the center.

Over the years the activity on protection and conservation of snow leopard has aimed at counting the stock just tracking extinction of the species. We hope that this project will contribute to restoration of the mammals,Yerkinbayev Y., executive director for Snow Leopard Foundation said.
The project will be supported by scientists of the center for snow leopard protection. Head of Mammalogy department of Institute of Zoology Alexei Grachov, who had dedicated his creative activity to the studies of snow leopards, stated that the activity of Snow Leopard Foundation will have a strictly scientific approach.
Nurali Aliyev stating that snow leopard has no state boundaries called the guests from all over the globe for collaboration in conservation of species and support of Snow Leopard Foundation development.

In their turn, the representatives of international organizations such as UNDP, International Environmental Union, WWF, The Paradise International Foundation and others expressed their readiness to provide expert and consultancy support to the foundation.

«Over 4000 snow leopards are living in the world, while the population reduced by 20% over the last 16 years. 3% of global species population is the habitants of Kazakhstan where the country was historically a habitat serving as an ecological corridor for the species.Today the separation of the range can lead to total extinction. Therefore, the initiative for Snow Leopard Conservation is unique, and on behalf of the nature protection organizations we would like express our appreciation and gratitude to Nurali Aliyev, Director of Central Asian WWF Grigory Mazmanyants said. 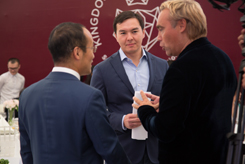 In the course of the event, Nurali Aliyev presented a new Ambassador of Snow Leopard Foundation Johan Nilson who is appointed to represent the interests of the foundation overseas. Johan Ernst Nilsonis the ambassador of the International Nature Conservation Union, Honorable Goodwill Ambassador of Nepal, President of the Sweden Association «Everest Summiteers Association», founder of company «Aidbox» and other. There are more than 30 expeditions in 145 countries of the world on the account of Sweden traveller, one of expiditions lasted for 18 months from the South to the North Pole, and registered in Guinness Book of World Records in 2015.

Some time ago people said that exploring the space is impossible, but the humankind made a leap to the universe. Personally I would prefer to say that there is no impossible thing. This project will be the first of its kind and its launch and implementation deserves appreciation, Johan Nilson said.
Other foreign guests told about funds operating in their countries to support Nature Conservation Projects. In particular, International Fund «The Paradise International Foundation»,initiated by the famous entrepreneurs, painters and philanthropists in China, headed by Jack Ma and Pony Ma, since 2015 founded five national parks with overall area exceeding 400 000 sq.m. «Snow leopard is the symbol of Kazakhstan, same as panda is the symbol of China. Care for symbolic animal species is very important for nature conservation activity of the world, however China is interested in protection of the snow leopard, because the unique beast animal dwelling in the territory of our country too. Our foundation would be glad to cooperate with the Snow Leopard Foundation. We could learn a lot from each other to mutually proceed with preservation and reintroduction of snow leopard», - said Vice-President and Senior Research Officer of «The Paradise International Foundation» Wang Dezhi during his speech.

Charity Auction was held in conclusion of the evening function including drawing of several exclusive lots: boxing gloves of Gennady Golovkin with his autograph note, bicycle of Alexander Vinokourov with his autograph note, two-day travel to Dubai with stay in 5-star hotel and fancy dinner by Bulldozer Group,travel to South Africa together with the famous traveler Johan Nilson, exclusive designer watch by Jacob Arabo and company Jacobs and Co, two travels to Monaco and meeting with the Prince of Monaco, private tutorial with DJ Smash, and finally,three pictures by Adrien Brody. All lots were sold to the guests of the evening to the amount of 1 528 000 US dollars. All auction earnings will be invested in construction of the «Kingdom of Snow Leopard» Center.